Grandmaster Susan Polgar had her first chess lesson in her family’s apartment in Soviet-controlled Hungary at age four. The lesson was taught by her father, child psychologist Dr. Lazlo Polgar. Dr. Polgar had a theory that any child could become a genius as long as they are taught a structured and specialized curriculum from a young age.

It worked, too. By the time Susan was 12, she won her first of four Women’s World Titles. Even with all his success, Dr. Polgar struggled to introduce a streamlined version of the experiment into other homes and schools worldwide. Then, he met Joe Miccio.

Miccio is a retired FDNY Firefighter who became a smoke eater after a 10-year stint in the NYPD. Between shifts, Miccio had tinkered with the chessboard and eventually invented a tool known as QuickChess, a simplified version of the game that teaches players the rules and strategies through a series of mini-games.

QuickChess, an educational board game teaching kids how to play chess, will be featured at the NYC Toy Fair at the Javits Center.

QuickChess will celebrate its 25th anniversary at New York City's American International Toy Fair at the Javits Center, February 18-21, 2017 at booth # 4211. It is a fun, educational, unique 2-sided board game that teaches competitive chess skills in 10 minutes by breaking down each piece’s moves and attacks.

First introduced at the 1992 NY Toy Fair, also at the Javits Center, QuickChess (www.QuickChess.info) offers players 8-games-in-1 box, with each mini-game showcasing and teaching a different aspect of chess. After learning, flip the board over and play traditional chess. It is highly popular with specialty toy, game and hobby shops.

The award winning game was invented by FDNY Firefighter Joe Miccio, Long Beach resident, who also spent 10-years as an NYPD police sergeant and instructor in Brooklyn. The idea for QuickChess came when a friend asked if he could find a better way to simplify and teach her children how to play chess. Firefighter Miccio now teaches children the game in schools and libraries.

Mr. Miccio will greet attendees at the GETTA1GAMES booth #4211 on Sunday, February 19, 2017 from Noon - 2pm. Come have a photo taken with the inventor.

The World Chess Championship began on Friday, Nov. 11 in New York City. Hundreds of millions of people are tuning in worldwide. The rest of the world still wonders how do you play chess? St. Louis Chess Grand Master and four time women`s world champion Susan Polgar has the answers, or should we say, all the moves.

“Amerigames International's multiple award-winning QuickChess is an easy-to-learn 10-minute chess game that allows children and adults to quickly master the complex game of chess without sacrificing the game's tactical and strategic elements."

"Designed to introduce classic games to children as young as four years, or to provide a few minutes of quick entertainment for adults in a hurry or with short attention spans."

“Intended as a young person's introduction to chess as well as a 10-minute diversion for adults, QuickChess succeeds rather well at both. It is nearly unique among commercial chess variants in that it simplifies rather than complicates."

"If Searching for Bobby Fischer piqued your interest, you and your child will love QuickChess."

"What QuickChess helps you do is focus on the more subtle elements of chess without having to understand the complexities." 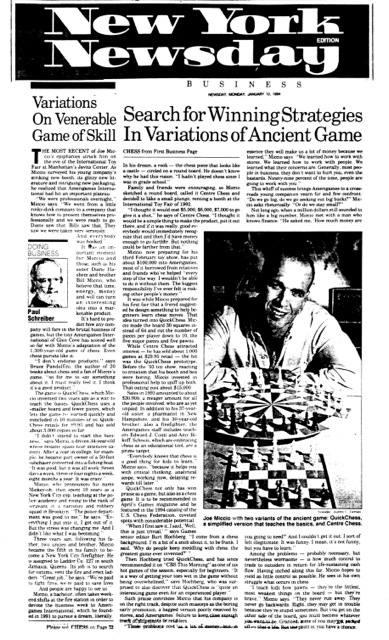 "'When I first saw it, I said, 'Well, this is just trivial.' says Games senior editor Burt Hochberg. 'I come from a chess background. I'm a bit of a snob about it, to be frank. I said, 'Why do people keep meddling with chess, the greatest game ever invented?'

“Then Hochberg tried QuickChess, and has since recommended it on "CBS This Morning" as one of six hot games of the season, especially for beginners. 'It is a way of getting your toes wet in the game without being overwhelmed,' says Hochberg, who was surprised to also discover that QuickChess is 'quite an interesting game even for an experienced player.'”

“QuickChess is used in schools in New York and New Hampshire, and has the endorsement of Bruce Pandolfini, America’s most prolific chess author.”

You are here: Home

Connect with us on Social Media